A trek of over eighty miles by two miners from Boulby has netted over £2000 for the Great North Air Ambulance Service (GNAAS) – and they’re hoping that even more donations will come in. 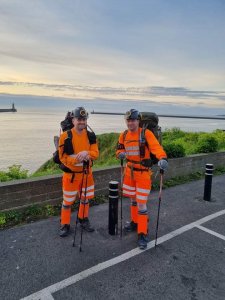 Wearing full mining gear – hard hat, lamp, high visibility gear etc. – they set off on a seven-day journey to walk the length of Hadrian’s wall from Wallsend on Tyneside to Bowness-on-Solway in Cumbria. They did it all whilst carrying backpacks containing their overnight camping gear. 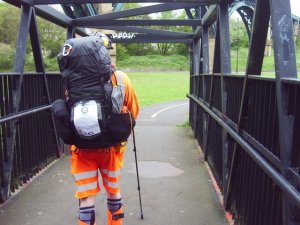 “It was a very physically demanding challenge for us as we had very little training, are quite unfit and the wrong side of 40,” admitted Keith Gordon who tackled the task with colleague Ben Robinson. “We found carrying 30kg each to be harder than we planned which took its toll as the days went by. But we kept going fuelled by Ibuprofen and coffee.”

Every day they were passed by small groups of walkers who were trekking the same route but staying in bed and breakfast accommodation overnight and carrying small day packs. Along the way a real camaraderie built up as Keith explains:

“It was a very extraordinary thing for us being with this group of relative strangers from different backgrounds and nationalities. The amount of support and encouragement we had on route was amazing; hearing peoples’ stories, people waving, taking pictures, calling us over to buy us a pint. It was a great experience which we’d love to try and do again at some point.” 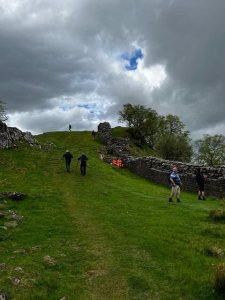 They were regularly stopped to be asked what they were doing and when they explained it was to raise funds for the GNAAS the amount of support they received was phenomenal. They were given discounted camping along with free food etc by a local campsite and it all ended in a pub in Bowness where the pair weren’t allowed to stand their round. 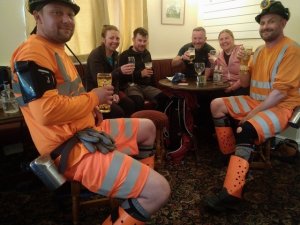 And there is more to come. Before they set off Andrew Fulton, the Vice President and General Manager of ICL Boulby, pledged to match fund the amount of money they raised.

Julie Jameson, GNAAS Corporate Fundraising Officer: “We really can’t thank Ben and Keith enough for their outstanding donation and fantastic support. It is the donations we receive from people like Ben and Keith that have enabled us to respond to more than 23,500 incidents since we began 20 years ago. GNAAS is entirely public-funded but with the continued support of the public, we hope to offer our service for the next 20 years and beyond.”

Anybody wanting to make a contribution to mark this achievement can still do so via their JustGiving page.