The Vice President and General Manager of ICL Boulby was among leading local business people sleeping out under the stars last night (May 9th) to raise awareness of homelessness and deprivation.

Andrew Fulton joined them at Middlesbrough Town Hall to take part in just one of a raft of similar events at locations throughout the country. 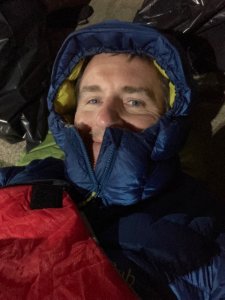 Andrew Fulton all tucked up.

“I was happy to take part in this worthwhile event which will hopefully raise and maintain the issue of homelessness and deprivation in the public eye,” he said.

“It’s all too easy to prefer not to notice the less fortunate or, even worse, turn a blind eye to those among us who are forced to live on the margins of society.”

The CEO Sleepout campaign began in 2014 when Andy Preston, now the mayor of Middlesbrough, organised a successful event. From local roots the campaign has expanded into a nationwide series of events.

The participation of everyone involved was warmly welcomed by Bianca Robinson, CEO of the organising national charity that brings Chef Executive Officers together to tackle homelessness.

“We are delighted that Andrew is taking part this year. He’s among our leading fundraisers and is one of nearly fifty leading local business people who have come on board to support our cause.” 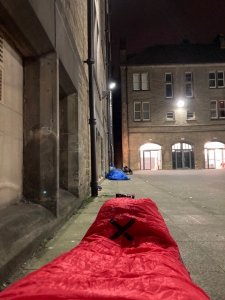 Settling down for the night.

Further similar events are planned for later this summer.

For more information or to show your support, please visit Andrew’s JustGiving page.