The worldwide demand for Polysulphate products from the ICL Boulby mine in East Cleveland has been underlined by figures for 2021 which show that during the year over 2.3million tonnes were handled from its storage and handling facilities on Teesside. 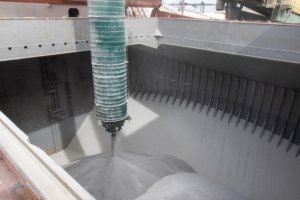 During the year its Terminal at Teesdock handled 171ships. Over 820,000 tonnes of Polysulphate was transported by sea to destinations including Brazil, the USA, China and India. The company’s operations were significantly enhanced with an agreement with PD ports, enabling products to be shipped in containers, loaded and despatched at Teesport.

Meanwhile 2022 has got off to a positive start with new records in January for mining and processing totals, demonstrating, says ICL Boulby Vice President and General Manager Andrew Fulton, the progress in improving its production techniques.

He explains “Of course, in common with many other businesses we have faced major challenges as a result of the pandemic but, thanks to the commitment of everyone involved in all aspects of our operations – and the sustained support of our parent company – we have continued to drive forward our transition from decades of mining potash to become the world’s first and only producer of the unique multi-nutrient mineral polyhalite (Marketed as Polysulphate) which is playing an ever-increasing role in supporting farmers and grower across five continents.”