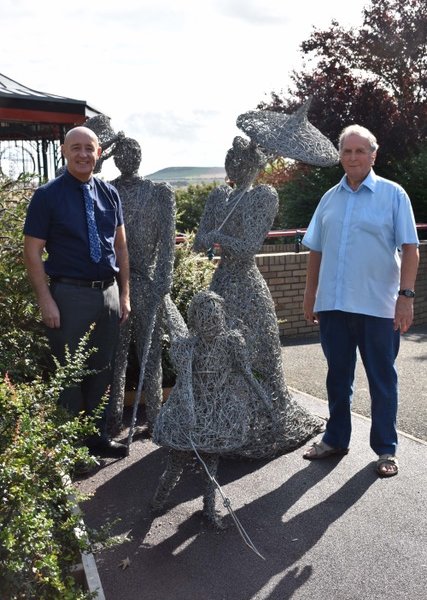 Cllr Stuart Smith (left) and Trevor Welburn with the statues on the new surface.

Community groups in Saltburn are eagerly awaiting the verdict of the judges who recently visited the seaside town to assess its entry in this years Britain in Bloom competiion. Previous attempts were set back as judges assessed the area around the statues and bandstand to be too messy.

“The gravel surround was difficult to keep presentable and some of it even found its way onto the statues themselves,” explained Trevor Welburn of the Saltburn 500 group. “We got marked down on that and it harmed our chances of going through. But we’ve done that his year and await the verdict at the end of October,” he added.

Taking note of the judges’ comments the group, backed by Saltburn in Bloom and the local parish council, applied for cash to replace the gravel with a firm surface. The work has been carried out, thanks to a Community Grant award by ICL Boulby, and the town made it through to the finals in the coastal category.

Local councillor and Saltburn 500 member Stuart Smith is hopeful that their efforts will be rewarded: “It would be absolutely terrific for everybody in the town to receive this sort of recognition,” he said. “All the partners involved in this bid are determined to do as much as we can to foster community spirit with a lot of effort going into the Christmas decorations.” 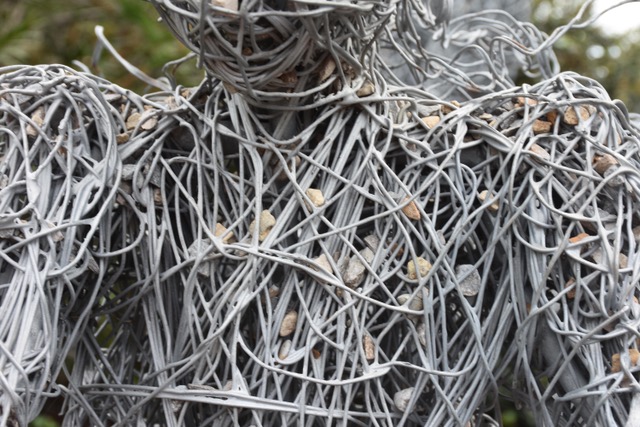 Gravel caught in the mesh of the statue.

Mr Welburn said: “We want to make as many people as possible aware that Saltburn is a great place to live and work and we are always happy to welcome on board new members who are prepared to volunteer to make a difference.”