It’s a hoot helping owls – but it’s no joke!

The World's Only Polyhalite Mine | ICL Boulby > It’s a hoot helping owls – but it’s no joke!

It’s an important time of year for the Tees Valley Wildlife Trust (TVWT) as it continues its invaluable work.

Presently they’re checking all the specially designed nest boxes they’ve built and installed to count and ring the chicks they find. Last year in east Cleveland around 65 were tagged in this way. So far this year ‘owl man’ Colin Gibson and his team have ringed about ninety – with more boxes yet to be checked. He expects the final tally to be double that of last year.

Good news for owls. Bad news for voles, shrews and mice – their main source of food. The increase in owl numbers can be partly explained by the mild winter which has led to a plentiful supply of their main food source. But they still face difficulties; 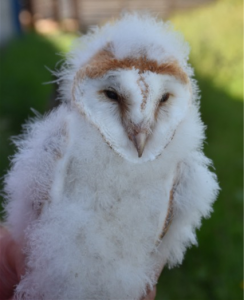 This chick is six to seven weeks old.

“The problems facing barn owls are several but are all centred on the loss of preferred nesting habitat,” explained Mr Gibson. “Ideally, they would like to nest in a hole in an old tree. But this can take over a hundred years to become available so it’s becoming rarer. Then you have the growing number of barns being converted to modern homes as farmers diversify. Once you add the design and materials used in constructing new barns which are more efficient, but not owl friendly, you can see why they need help.” 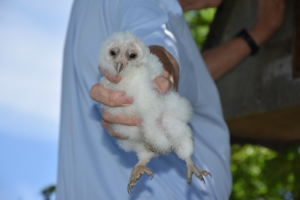 This chap is four to five weeks old.

In fact, it’s estimated that, these days, some 80% of barn owls are born in boxes. A regular donation from ICL Boulby is aimed at ensuring the year-round work needed to ensure the survival of these charismatic birds can continue.

A female owl will typically lay 4-6 eggs, usually one every few days. With many of the boxes this year housing four chicks it means that, on average, dad has to provide his family with at least 24 items of their preferred food, field voles, every day. If voles are in short supply he will switch to shrews. Working on an ‘owl exchange rate of one vole = two shrews’ – that’s a lot of rodents.