‘The first step on any journey is the hardest’ is the message from an employee at ICL Boulby after reading a poster at the mine about screening for the risk of prostate cancer.

Steve Chesters works in the Technical Services Department at Boulby and has decided to tell his story going back 16 months in the hope that it may encourage other men to request a blood screening for PSA (Prostate Specific Antigen). 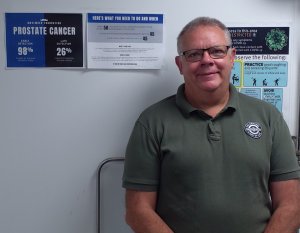 He explains “In the toilet near our office there’s a poster on the wall that suggests that, at 50 years old, you should speak to your doctor about PSA screening. Being 55, (5 years later than the poster suggested) I thought this would be a good idea. I made the appointment with the doctor for counselling followed by an appointment to have a blood test to get my PSA screening done. “My results came back at 4.8, slightly high, but not really of any concern. The advice was to be retested after 6 months to see what the levels were. Six months later, I had a second blood test and the PSA level came back again at 4.5, which was slightly high but still not at a level for significant concern. However, due to the prolonged elevated level, I was referred to the Urology Department at my local hospital. Following a consultation with a Urology Specialist, and due to my PSA levels still being relatively low, it was decided to wait again for another six months as the risk of going to hospital during the corona virus pandemic outbreak was considered a higher risk to me than the PSA level at that time.

“Six months further forward, I had a third blood screening, where the PSA level was 5.3. At this point, it was decided that further investigation into the elevated PSA levels was required. Over the next three months I had an MRI scan, Prostate Biopsy and Bone X-ray scan. As a result of the investigations I was diagnosed with having a high-grade aggressive cancer in my prostate gland. This came with a recommendation for urgent surgical removal of the prostate gland.

“Approximately eight weeks after surgery I returned to work and I have decided it would be a good idea to share my experience and thoughts in the hope that, should someone read this, they may be spurred on to ask the question and in doing so, may actually save their life.

“I’ve had the results of the pathology report on the removed prostate. There were two high grade cancers, well contained within the Prostate gland (thankfully) and no signs of external spread of the cancer. I have one further blood test to be carried which will determine my PSA level. Three months after the operation, it’ll hopefully be at zero and I can be then diagnosed clear of prostate cancer and effectively be in remission.

“On reflection of the events of the last 16 months, reading a poster in a toilet, requesting PSA blood screening and early diagnosis, has undoubtedly saved my life! PSA screening is not at present, offered to men as a routine screening tool. It has to be requested.

“It is a fact that Prostate Cancer kills more men than Breast Cancer kills women, yet routine breast screening is available to all women (rightly so) but I find this hard to understand why routine PSA screening is not offered to men. A simple blood test done early enough could save your life, but you must request to have it!

“The first step on any journey is the hardest. I would recommend to anyone to have a regular PSA blood screening test done, just so you know what your normal level is and so that increases can be identified early and any treatment can be carried out in a timely manner so as not to put your life at any greater risk then is absolutely necessary.”

Comments ICL Boulby General Manager and Vice President Andrew Fulton “Health and Safety is the top priority of everything we do and that includes encouraging everyone to make sure they safeguard their own wellbeing.

“It is remarkable that reading a poster can turn out to be life-saving and I congratulate Steve for coming forward to tell his story which will hopefully encourage others to follow his example.”