It’s every parent’s worst nightmare. After the joy of bringing a new member of the family into the word the anxiety and desolation that comes when you’re told your baby is seriously ill.

It’s a nightmare that was all too real for Emma Vincent, 27, and Ross Kennedy, a 30-year-old contractor at Boulby mine near Loftus where they live. The joy at becoming pregnant after a couple of years of trying for a second child was rapidly overshadowed. First, Emma was admitted to James Cook hospital in Middlesbrough following an haemorrhage at home, she also had COVID at the time. Her life was at risk. Then, her placenta detached from the uterus putting her unborn child’s life in danger. An emergency caesarean section was needed to save the baby’s life which was just twenty-seven weeks and four days into gestation.

After the successful procedure the new born was immediately whisked away to isolation. He too had tested positive for COVID. It was to be twelve days before they were allowed to see him after a phone call from the hospital to say, “your baby is very poorly. You need to come through.”

It was a day Emma and Ross will never forget;

“it’s a phone call no parent should ever get,” she said. “As we drove we knew that the day we got to meet our baby could be the day we also have to say goodbye. Seeing his two pounds seven ounces body hooked up machines keeping him alive was heart breaking.”

Over time he started to improve and bit by bit the full miracle of his survival revealed itself. Shortly after birth he contracted a form of sepsis for which he needed a ventilator. The condition also triggered a bleed on his lungs which caused one of them to collapse and pneumonia to set in. He was attached to more machines. 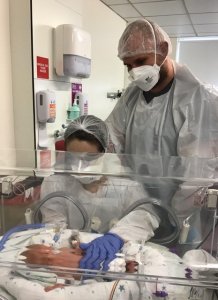 His problems were far from over. As mum and dad arrived at the hospital, to be greeted by hospital staff in full PPE – which they too had to don – they were told he also had fluid on his heart and two brain bleeds. A small one on the left, a larger one on the right. Not surprisingly, it was almost with a sense of wonder when things began to change:

“The amazing doctors and nurses continued to do anything possible, and he started improving,” said Emma. “Soon after he was put on a ten-day intensive course of steroids. From then he came on leaps and bounds and bit by bit he grew bigger and stronger.”

After seventy-nine agonising days in hospital mum and dad were allowed to bring him home, which was shortly before Christmas 2021. Baby Remy has continued to thrive since and is currently getting expert at rolling around and is practicing sitting unaided. 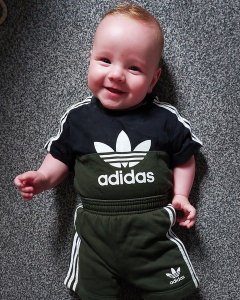 Throughout the ordeal mum and dad were supported by a little-known local charity, Neoangels which supports the families of sick and premature babies at James Cook and North Tees hospitals on Teesside. Emma and Ross say they will always be in their debt;

“As you can imagine there wasn’t a day that went by that we didn’t want to go see our baby, so driving everyday was a must,” recalled Emma. “Because of COVID restrictions we had to keep two cars on the road in order to visit the baby and also take care of our five-year-old daughter Aela. Neoangels helped with the expense of driving and parking and also gave us vouchers to enable us to get something to eat while visiting. Eating was the last thing on our minds!”

As well as the practical help the charity also leaves sweet treats and Christmas gifts for the babies on the unit. The final word has to go to a proud, happy and relieved mum.“

“It was the little things, walking in to something different. Something you weren’t expecting. It often brightened your day. We couldn’t be any more grateful. The least we could do is raise awareness of the charity so they can continue helping other parents go through the unimaginable.”

To find out more about the charity visit www.neoangels.org.uk