At the beginning of July, three students from Nunthorpe Academy arrived at Boulby Mine to complete their work experience.

Jonae, Calumn and Jacob, who are in Year 10, are currently studying towards their GCSE qualifications.

The placements, offered by ICL UK, aimed to provide the students with an insight into their potential career choices and to introduce them to a professional working environment.

Jonae spent her working week assisting  Bessie and Amy in The Gatehouse, where she learned secretarial skills and the administrative processes at the mine. 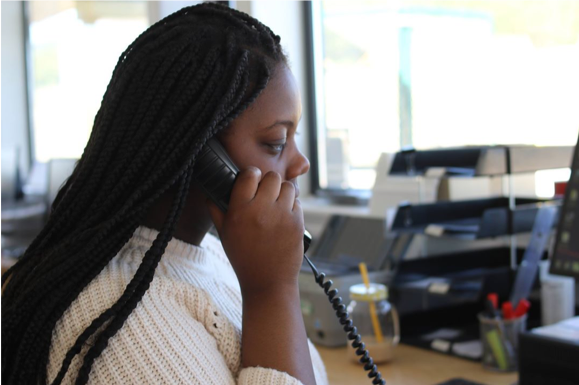 Jonae added: ‘It has been a good week, I’ve really enjoyed it.’

‘The staff were really helpful, fun and positive and that made it enjoyable for me.’

Bessie was very pleased with how Jonae approached the week and her attitude towards the placement.

Bessie added: ‘Jonae was very interested in learning and keen to learn anything that we put to her.’

Jonae felt that the week ran smoothly, with the only issue relating to not being able to hear people properly on the phone.

She said: ‘At first, I struggled to hear people talk on the phone. When this happened, I asked the caller to repeat themselves and over time, I got used to the names and found it easier.’

Bessie said: ‘Jonae developed a range of skills during her time with us. She processed ingoing and outgoing mail, answered the main telephone switchboard and also learned how to issue site access cards.’

We asked Jonae what she had learnt during her time at ICL UK and what aspects of the week were the most enjoyable.’

‘I’ve developed my multi-tasking and teamwork skills. I also enjoyed the socialisation aspect of the working environment.’

‘When I heard I was coming to ICL UK, I didn’t know what to expect, but now I could definitely see myself pursuing a career in business administration.’

‘I would recommend ICL UK to any students wishing to pursue a similar career path.’

While Jonae worked at The Gatehouse, Calum and Jacob spent the week with Phil Bedford in the Engineering Department,at a range of areas from geology to project engineering.

Phil said: ‘The week went really well. Both Calum and Jacob were very attentive and appeared genuinely keen to learn from each of the areas visited.’

‘CPL’s internal processes have been good, as has the commitment of CPL staff to ensuring that the work experience gained is of value to the students.’

‘The lads knew that they could contact me at any time and the constant dialogue and daily contact that we had ensured that there were no significant issues.’

We asked Calum and Jacob how they thought the week went.

Calum said: ‘It was really good. I had fun’.

Jacob added: ‘I think the that week went really well.’ 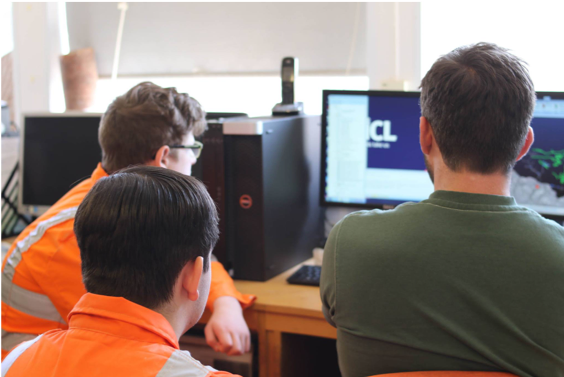 Calum and Jacob in the mine’s geology department

‘The staff were really helpful in explaining what was happening in the different areas.’

Calum and Jacob developed skills in a range of areas and disciplines of engineering.

Phil said: ‘They gained an appreciation of many aspects of not only engineering, but also of the general business environment. Briefly, they have covered; Electrical and electrical engineering, fabrication, instrumentation and control, project engineering, metallurgy, analytical laboratory, geology, procurement and warehousing, cost control and SAP.

Calum said: ‘There were no issues during the week which we couldn’t overcome, and we have developed our time management skills.’

Phil said: ‘They have gained an appreciation of many aspects of not only engineering, but also of the general business environment. Briefly, they have covered.’

As well as developing their skills, Calum and Jacob were really intrigued by the Polyhalite plant on the Boulby Mine site.

Jacob said: ‘Walking around the Polyhalite plant was fun. I prefer working at heights, so it suited me.’

‘The work experience was somewhat how we expected it to be. It was good, but we would have liked to get more involved in using the plant equipment.’

Both Calum and Jacob said they would be happy to recommend ICL UK to other students who are wanting to follow the same career path.

All three students performed very well during their work experience week and ICL UK looks forward to welcoming more students in the future.