The weather could have been kinder as the annual Saltburn-by-the-Sea commemorations came to a close last month. But the grey skies and sodden grass couldn’t dampen the spirits at one of the highlights of the final day — the official naming ceremony of the famous model locomotive.

It was carried out by the Mayor of Redcar and Cleveland Council, Councillor Carole Morgan. This was fitting, as the model has been named in honour of the mother of Jackie Taylor, who was a major fundraiser for the town in her time. The organisers felt that all too often mothers do not get the recognition they deserve. A theme picked up by the Mayor in her opening remarks; “I’m delighted that the quiet strength and support of women has been recognised in this way,” she said. “Now, after ten years of being incognito it is fitting, and my pleasure, to formally name this locomotive ‘Harriet’”. 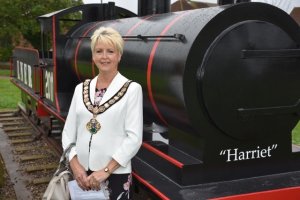 The model has been in situ since 2011 when it was installed as part of Saltburn-by-the-sea’s 150th birthday celebrations. But it disappeared for nearly three months as it underwent a total refurbishment at Universal Coatings at Haverton Hill on Teesside after time and the weather took their toll.

The work was funded by a donation from ourselves alongside contributions from the local council and parish councils, Saltburn 500 club members and supporters. This meant the work could be carried out to a higher specification than planned and it is now thought to be weather proof for something like ten years. 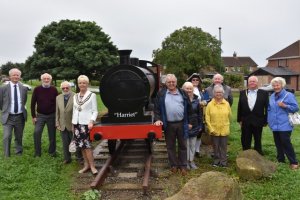 Just some of those involved in the refurbishment project.